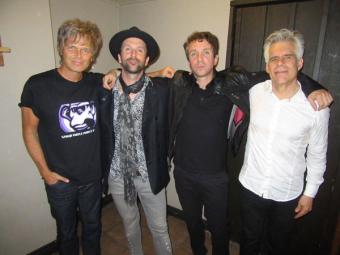 This past weekend Jeff Burrows, best known as the drummer for Canadian rock bands The Tea Party and Crash Karma, banged the skins for a lot of other acts — 36, in fact, for more than 24 hours straight, and his arms did not fall off.

It's nothing new for him, drumming that long. It was his 10th annual 24-hour drum marathon, this time held June 3-4 at Good Time Charly in his hometown of Windsor, Ontario, to raise money for the Transition To Betterness (T2B) organization as well as the St. Clair College's Scholarship Fund.

T2B is a local community organization dedicated to providing comfort for those impacted by a life-altering illness like cancer and other diseases in the Windsor-Essex County community. Established in 1997, T2B funds multiple programs that operate mainly within our local hospitals and health care facilities and help provide the much needed bridge between the hospital and home. Burrows has been helping raise funds for T2B as far back as 2003.

Samaritanmag spoke to Burrows about how his relationship with Transition To Betterness came about, winging it with The Trews and how exactly a person prepares themselves to drum for 24 hours straight.

First question: Do you have any arms left?

The arms are always okay. To be honest, physically the biggest problem you end up with is the middle of your back and kind of the tops of your legs, right under your bum, your thighs. That's from hanging off the edge of the drum throne. Other than that no big deal. I did, however, go for a massage yesterday.

Did you have to do any special training to prepare for the marathon?

I make it part of my life. Around six to eight weeks out I take it as a spring cleaning and a means to get back into shape after 10 months of debauchery from the rest of the year. I quit drinking. I'm pretty much vegan the whole time. I cut back on pretty much everything. I run six miles a day and then walk four miles at night with my wife. I go pretty hardcore and for me it works. It benefits me in more ways than just trying to be charitable within my community.

Playing with so many different acts, did you learn their set lists or get to rehearse with any of them?

No, never. Drums are an atonal instrument, so usually the bands that I have come in are anything from '50s, '60s rock to Billie Holiday jazz to blues standards to classic rock. It's not that hard. The beautiful part about the Windsor area is I'm surrounded with a million amazing musicians, so it's really easy when you've got players who can cue you, whether it's stops, pushes, slow downs, it's amazing. Any drummer who has been playing and can play in that environment can do what I do. You don't really need a set list.

Even when the Trews came on in the twenty-third hour — and the last thing I wanted to do was screw up some of their songs — some I wasn't familiar with. And [guitarist] John-Angus would be like, "It goes dum-dida-dum-dida..." and it always goes off without a hitch.

Now that you've been doing this for 10 years, are there tips you've learned for how to succeed at something like this?

As the years go on the more you realize you can't do things by yourself, and in order to create a true community minded and spirited event you need the help of your community. I've got one gentleman [Gary Demmans] who's been a friend of mine since university and I was working midnights at the processing plant for Canada Post. He was my supervisor and he was a fan of my band and he was the first to buy it and he was the first to come out to all our shows and he's just a huge music maniac and we've been friends ever since.

He was involved in Transition To Betterness early on as a volunteer and they approached the band early on, so he's been with me since day one and I've worked with the volunteers and the founders for 10 years-plus, but you always add people into the mix. People who can bring sponsorship dollars or raffle prizes. I had a gentleman come in from out of town this year with money he had collected on his own and every hour he was awake from midnight to midnight with me he would add $50 into this mason jar. And at the end of it he had donated himself $1,600. It's about getting the message out and the spirit of it.

Have you always used the marathons to support Transition To Betterness?

Yeah. When I first started this I was in radio [The Rock] and The Tea Party had taken its hiatus. The long story is The Tea Party had done some stuff for Transition To Betterness. When we played the SARS festival [in Toronto in 2003], I met all the drummers from all the bands and asked if I could have all their sticks for a charitable effort. I was going to eBay auction Charlie Watts' sticks from The Rolling Stones, Neil Peart's sticks from Rush, so a) I got to meet all my heroes, and b) I had to swallow that shy pill because I'm not a guy who would approach anyone for an autograph — I get shy and nervous just like anybody else — but this was, "you gotta get out there and help everyone." I thought it was a pretty cool idea and that's what really got me into giving to them specifically.

I always say that I'm a simple guy. I like to see results. I know that there's a need for research and cancer research and so on to find a cure, but when there's amenities like Transition To Betterness in my community and they receive no municipal or provincial or federal funding and you see the results that it gives to a hospital bedroom that a kid who has terminal cancer is in — they transform that room into a playground with all the toys and gadgets and everything to keep that kid's mind occupied — that makes it all worthwhile.

It isn't finding a cure, but it really helps the families. Especially who are dealing with the other family member who has been diagnosed.

I don't know a single person who hasn't been affected by cancer and primarily we try to focus on on the children's side of things. It's a tough nut to swallow. I'm really not good with dealing with a friend or an acquaintance or their child, or really anyone, with cancer. I'm not good at going to visit people in hospitals, so this is my way of sort of dealing with it.

How much money did you raise this year?

For T2B we raised over $11,000. But overall because I split that with the St. Clair College Scholarship Fund, which raises money for academic and athletic scholarships for our local college, we did over $21,000. Last year we made just over $11,000 for them as well.

And how much have the marathons generated in total over the last 10 years?

With the marathons, you could easily say $100,000 and with the eBay auctions and other things I've done for T2B I'm probably closing in on $300,000. It's fun stuff. The hardest part is the last six hours of the marathon. I'm usually going, "Get me out of here, I'm never doing this again..." Until two days later when I go, "That was fun. Let's do it again."